Yesterday, Wayne and I were featured on Moscow Television. Via an interpreter, a Moscow reporter asked us questions, and we answered in English, which was then re-interpreted back into Russian for the cameras. The experience was not unlike any North American interview (blonde and well-kempt reporter, vivacious cameraman, semi-contrived directives), except, midway through a televised demonstration of how the sculpture works, there was an unexpected short in one of the sockets causing electricity to zap down through a pull-chain, turning it red hot and burning it off in a poof of acrid-smelling smoke. We didn’t even notice until we smelled burning. What unfortunate timing! 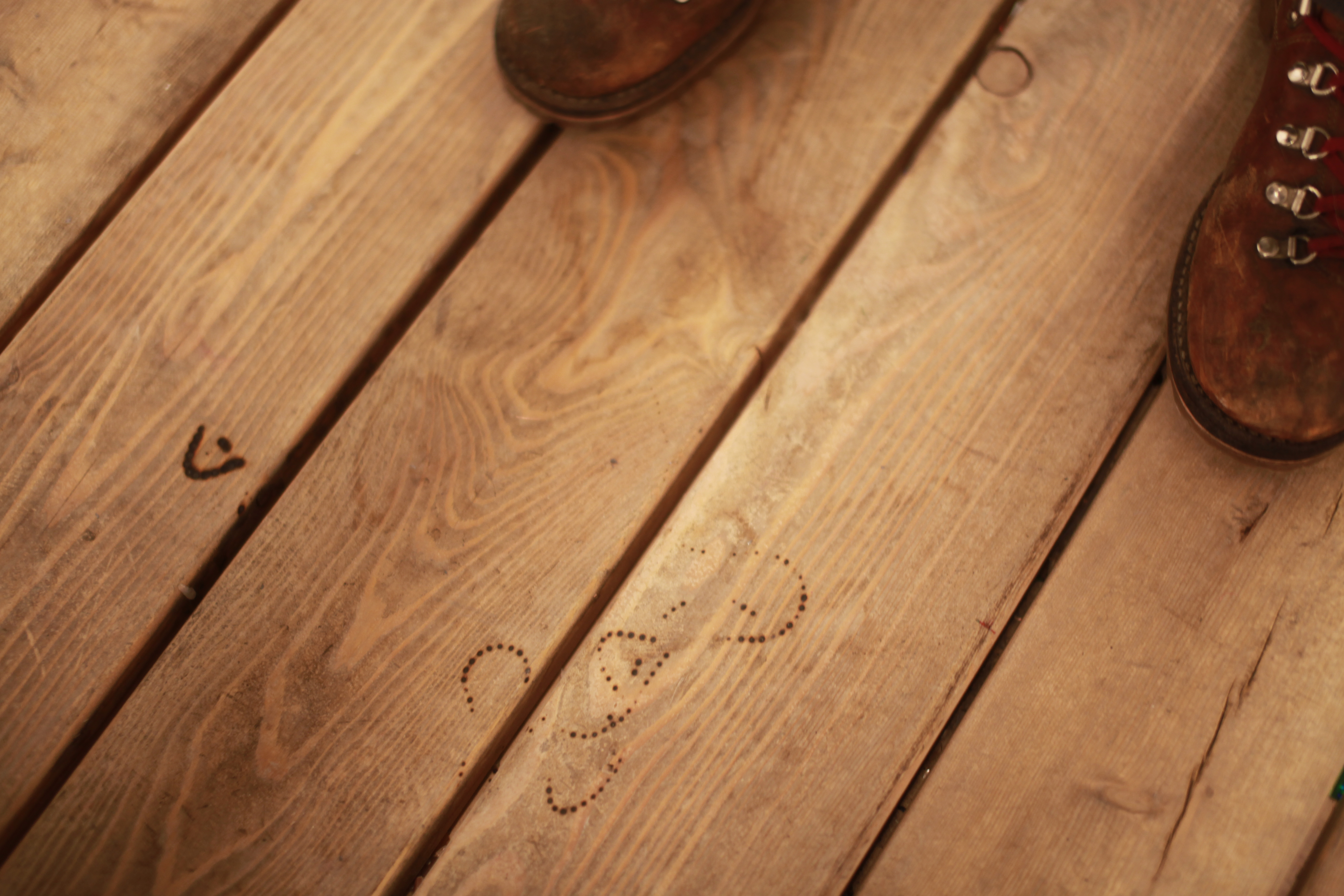 Needless to say, Garage’s Public Relations rep sprung tactfully into action, and the incident was casually swept under the rug. The moment news crews left, the electrician appeared and started tinkering again. But the implications, especially in a country running on 220v, were a teeny bit scary! Boy am I glad we tested the CLOUD before January 2nd!

Don’t worry – this isn’t as dramatic as it sounds. Hiccups are expected. There were major electrical kinks with the first CLOUD (we couldn’t get the thing working until two hours before Nuit Blanche when some beneficent electrical fairy descended from the City of Calgary to lend a helping hand!) but it would be a hell of an embarrassment if we managed to electrocute ourselves on Russian TV!! After some discussions, dissections, and an electrician carefully testing each and every light bulb socket this morning, we established that we literally had our wires crossed (language barrier + exterior helpers), and Wayne’s confident that it won’t happen again.

Still… there’s something dangerously delightful about the idea that the second edition of CLOUD is an actual honest-to-goodness electrical cloud – it’s emitting its own lightning bolts! 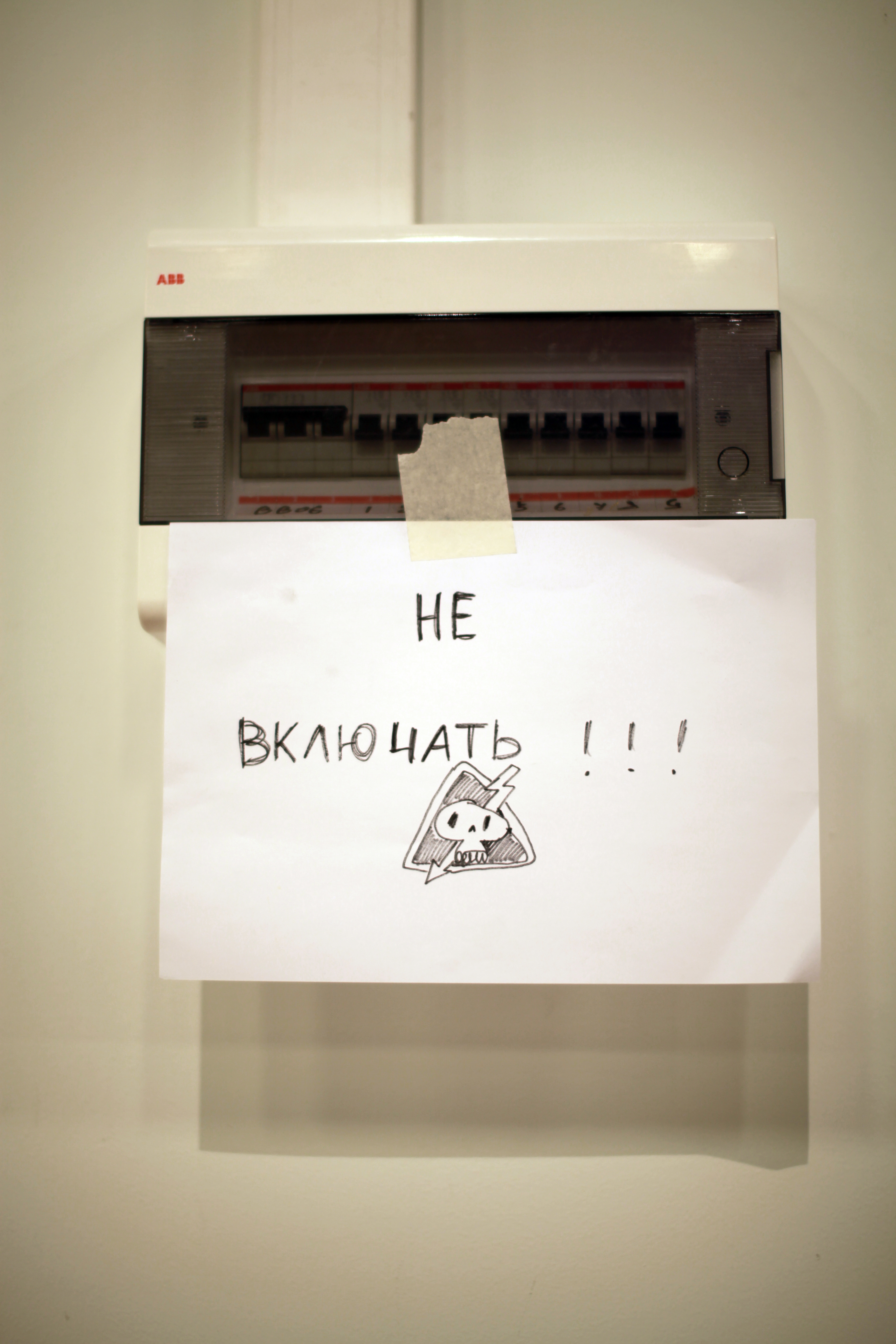 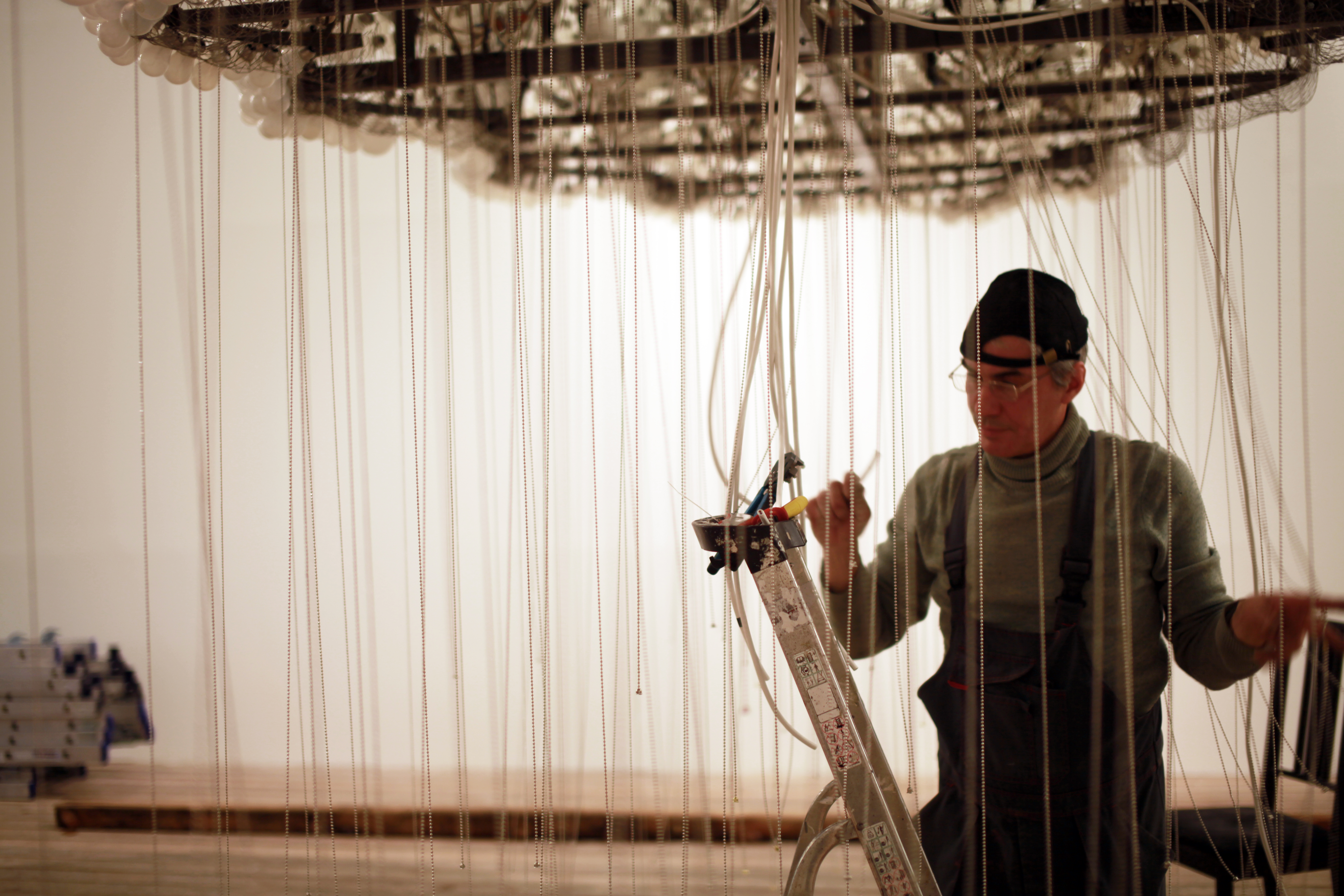 There are only a few more aesthetic details to take care of before the show opens. Of course, I’m a little disappointed that admission to the show is 1,000 rubles (the equivalent of $30 CAN) because we can’t just ask our local art-friends to attend, and I’m also concerned that a higher-end clientele won’t be stoked enough to have fun. This system of pricing is probably all very complicated, but 1,000 pyr. seems like a gargantuan cost! Still, Art Experiment is going to be an amazing show, so hopefully it will be worth every penny.

The other artists have started showing up, and they’re all really great, talented, interesting, and entertaining folks. The first was Danielle from the London. She’s still a student, but she’s building (with the help of a factory design team) a series of interactive multi-sensory domes. Audiences are invited to crawl through these globes (filled with sand, foam, lights, fabric, paper, etc) and view new miniature worlds together.

Jason from New York is presently air-sculpting large-scale inflatable tunnels and a balloon sculpture. He shapes the tunnels out of billowing painter’s plastic, which buoys into the air with the help of several fans. The simple movement and sound to this piece is stunning.

Today we also had the pleasure of meeting Art Experiment’s newest arrival, Karina from Munich. Karina has constructed a giant, helium-inflated ball that has dozens of charcoal nubs attached on all sides, like a gentle bomb. The ball is places in a white room, floating in mid-air, and audiences are invited to bump it around, drawing on all the surfaces of the space.

This is all very cool stuff, and we’re super excited to be part of this crew! It’ll just get more interesting as the remainder of the artists appear. Considering that this is our first international showing, I think it’s an extra special delight to be meeting such an interesting medley of folks from all over the world, each bringing their own understandings of interactivity and contemporary art-making. No doubt we have much to learn and share. And who knows? Perhaps this will change our views of the entire (art) world. Or maybe it will simply be a valuable re-affirmation that this whole wacky planet offers some striking similarities. All we know is that we have one day left to finish CLOUD, and (for now) we’ve got to keep our feet firmly planted and get back to work… just for a little while longer. Cross your fingers for no more electrical storms!