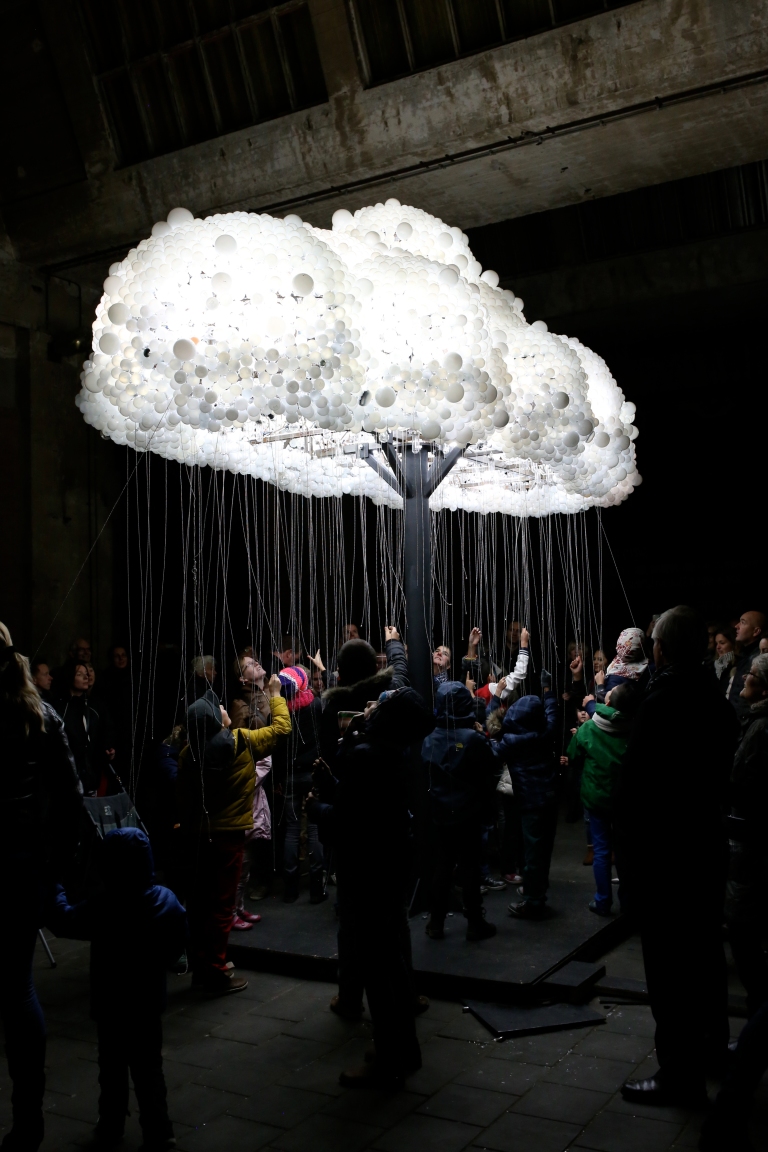 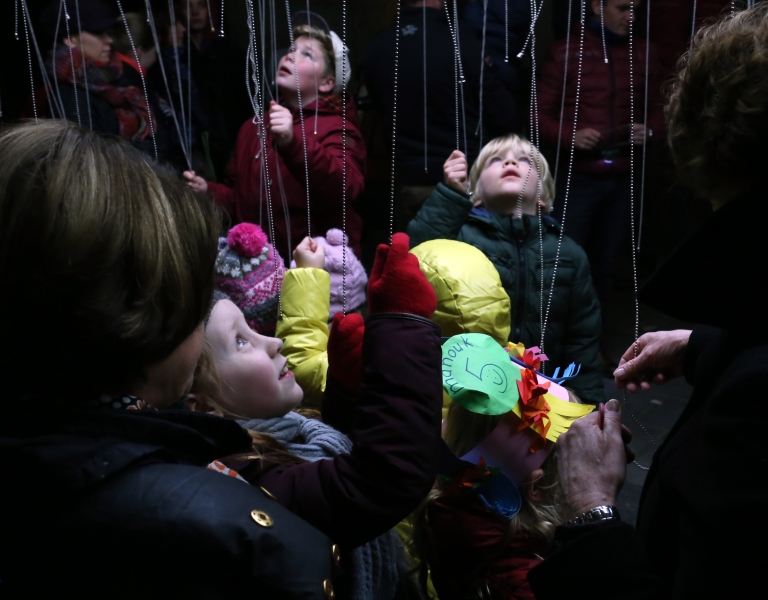 GLOW Festival in Eindhoven, Netherlands began on Saturday, November 9th. Within the weekend alone, GLOW saw approximately 110,000 viewers, walking from piece to piece, observing giant blimp-bodied kites and projection mapping on buildings, a football stadium overcome by projections and lights, swamp monsters projected on the mist above the canal, an LED wall created for water-graffiti, and so much more. In this blog post, I want to share more about GLOW Festival, and some thoughts we’ve had lately about interactive art – CLOUD in specific.

GLOW is an 8-year old light festival – making it an established light festival in relation to many. Eindhoven, the setting for GLOW, was the original home of the Philips Company, which financed many aspects of the town after it was severely bombed in World War II. Early pioneers in standard lighting, Philips undoubtedly influenced Eindhoven’s casual love of LEDs, new technology, and light.

Perhaps in reaction to GLOW’s mainstream success, a new, “more experimental” part of the festival called GLOW NEXT has emerged. Removed from downtown Eindhoven and set in the old Philips factories, GLOW NEXT is a fascinating, dense, and interesting foray into interesting ideologies about the nature of light. Unlike GLOW, works involved with GLOW NEXT are sometimes indoors, or small. They are free to be less mainstream and less attractive, if their concept calls for it. Essentially, GLOW NEXT is the appendix to GLOW.

GLOW is one of two big events in Eindhoven. The other is Dutch Design Week. Audiences of the 8-year old festival are established and expectant. They are ready and willing to interact. This catalyzed some thoughts about interactive art in us, prompted by the unfathomably gargantuan audiences of the festival and the heart-rending moment where Wayne and I stood back, watching people interacting with the piece, and wondered how on earth CLOUD will survive this ceaseless torrent of uninhibited youngsters without being shredded string by string. 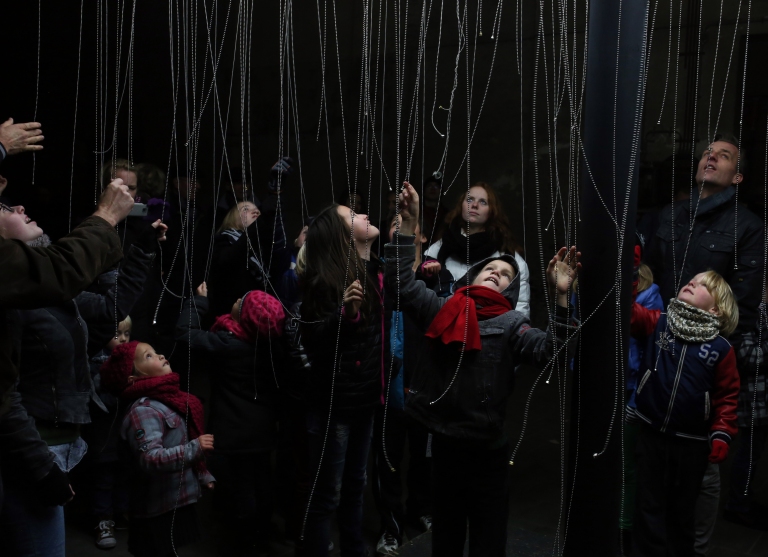 Interactive wiewers of all ages – especially children – lend an energy, immediacy, and willingness that far outweighs potential drawbacks. But the same inhibitions that make kids excellent interactive audiences, makes us wonder if a work can be tactile without limiting itself just to the realm of tactility? What is the specific spark that that interactivity grants an artwork? And does that spark blind audiences from looking deeper, and seeing multiple levels of meaning in a work?

The issue of interactive art, ignored often by critics for being too popularist, too glitzy, and for pandering too much to the evolving attention spans of 21st Century minds without substantiated conceptual content to justify its appeal, has taken a forefront in our minds since the beginning of GLOW Festival in Eindhoven. 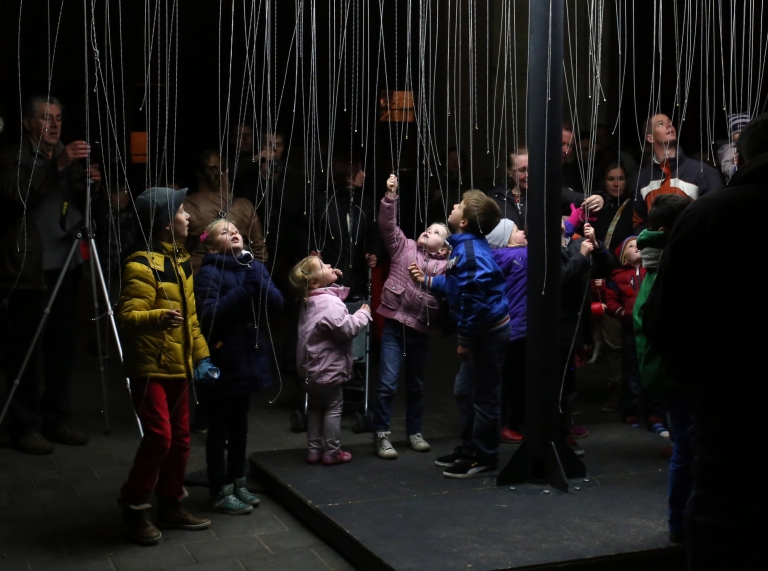 We’ve reflected on criticisms of this mode of art-making – some of which are justified, and some of which demonstrate limited foresight and imagination – and contemplated the potentials of the medium. How can we, as artists, create thoughtful, credible, and enveloping works of art that engage the viewer on multiple levels without sacrificing either concept, or human touch? How can we develop the social nature of interactive art to demonstrate the purpose and use of art in a changing global community – without dictating purpose or use as the only important elements of art? How can an artwork touch and effect a viewer both literally and figuratively? And, on a more practical level, how can we make delicate interactive art without people ripping it apart?

Especially in a Festival context, it sometimes appears as though only spectacular, entertaining, and aesthetically pleasing types of artwork are represented. While watching audiences at GLOW, we wondered if we have in some way limited the conceptual potentials of the work by making it interactive. Or can we give our audiences (even the youngsters) the benefit of the doubt and assume that the quieter social, communal, and material messages of CLOUD are resonating somewhere behind the endless clicking of pull strings?

Perhaps that’s just the nature of the beast. How can we even begin to answer questions like these? They were present during WRECK CITY, and they’ll be present again while we build our upcoming public artwork SOLAR FLARE. Maybe the best approach is to allow interactivity time to grow, expand, and remain as free and loose as possible. Perhaps only then, can it flourish and evolve. 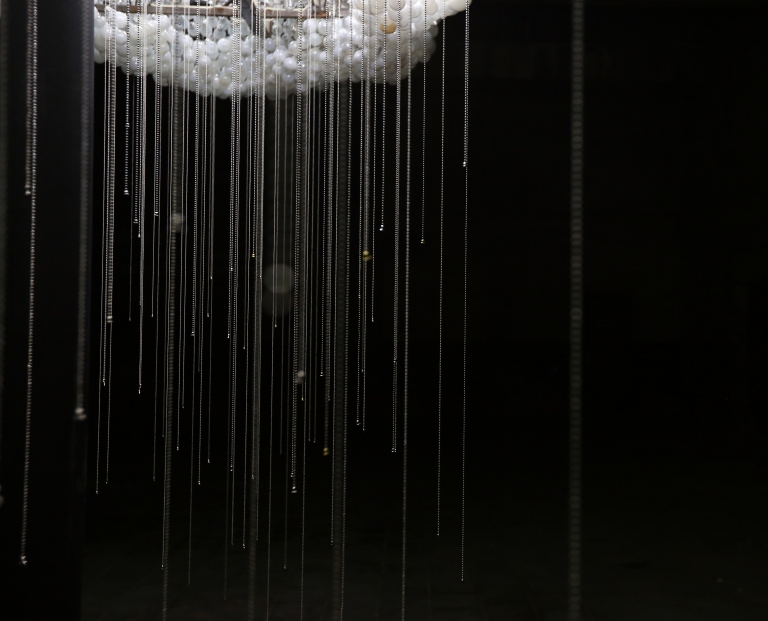 CLOUD has become a barometer, and we have enjoyed our time, watching different international audiences interact with the work. We designed it to be interactive, to take a beating, and to inspire wonder and delight. In the end, while interactivity poses challenges, wouldn’t CLOUD look lonely without all those people? Isn’t it better to inspire a sparkle in their eyes, than to remain in the realm of safer, more predictable work?