In contrast with the ultra-modern and spacious exhibition site in Singapore, at Light in Jerusalem CLOUD was programmed into a tiny plaza in the ancient Armenian Quarter of the city. Tucked into a secret pocket, the sculpture appeared to viewers as they emerged around the corner, highlighting a mundane domestic space. While the site wasn’t always ideal, it had tons of character, informed largely by the neighbours living and working nearby. 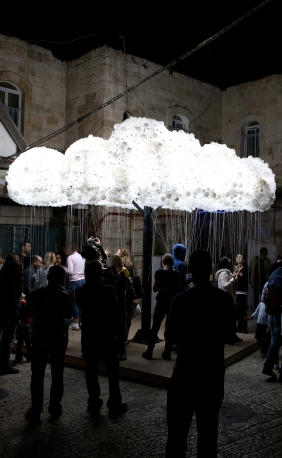 The neighbours watched us assemble CLOUD from beginning to end, peering down from surrounding apartment windows and watching from the “community couch.” On the day that CLOUD was to be illuminated and the festival was scheduled to begin, you could feel the neighbourhood’s excitement. That night, many people from the surrounding community came to see what CLOUD would look like. Lots of them stayed to watch not just the sculpture, but the people underneath it.

Amongst other things, Jerusalem is a tourist town, based on historical and religious significance to many different cultures worldwide. Especially downtown, the locals make their living by selling things to visitors, and they certainly aren’t shy about trying to make a buck or two. 25,000 people visit Lights in Jerusalem every night, and many Jerusalmites see it as another opportunity to sell trinkets, drinks, snacks, and souvenirs. 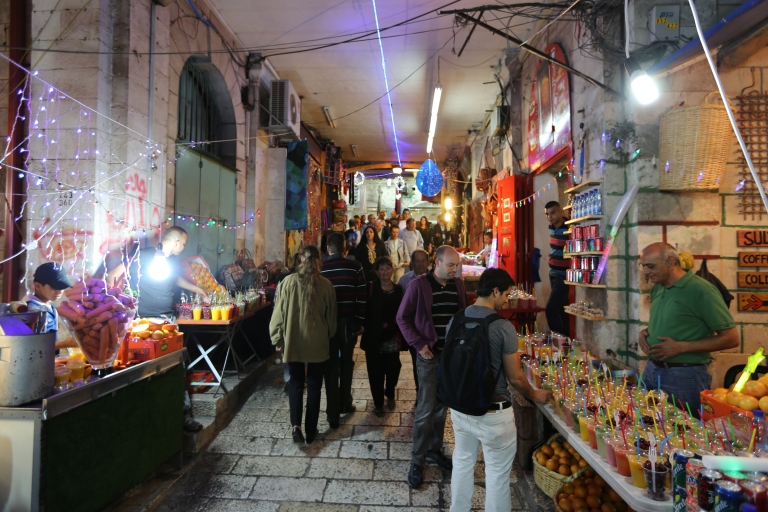 This influences the feeling of the entire festival, adding a (sometimes tacky) reminder that life goes on, even in ancient spaces. 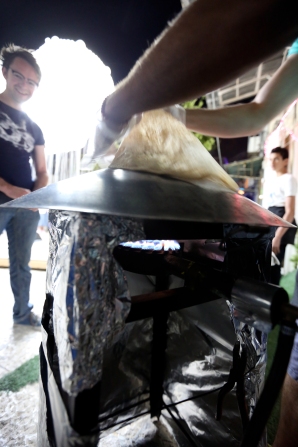 Knowing this, we shouldn’t have been surprised when the neighbours erected a felafel stand beneath CLOUD, selling wraps, Fanta, Coca-Cola, and blinking LED-wands.

While extremely kitschy, this became part of the experience of the sculpture, and it added a level of site-specific authenticity. It was a way for local people to interact with the presence of the festival by participating directly. It gave them satisfaction and another reason to be excited. In the end, we wouldn’t have wanted it any other way.

Overall, we were surprised and delighted by the diversity of people who spent time beneath the sculpture, and the enthusiasm that viewers brought to interacting with the piece. The neighbourhood – Muslims, Christians, Jews, Palestinians, tailors, children, and expats alike – treated us with a warmth and generosity we could never have imagined. The people of Jerusalem have earned a place in our hearts. In light of the present situation in Israel and Gaza, our thoughts are turning frequently to the friends we met in Jerusalem, and we extend our deepest wishes for an end to the current violence, peaceful avenues for communication, and eventual stability.

The remainder of the festival held some gems. For a complete list of artists and works, visit Light in Jerusalem’s website.

One thought on “Falafel Beneath CLOUD | Jerusalem”