While on Residence at The Banff Centre over the summer months, we began a new series of site-specific light installations called The Deep Dark. Intended to illuminate the interspace between our sacred (and natural) environments and cultural constructs of darkness, the series formed in response to interviews. Participants were asked: Why do we fear the dark? Is darkness a presence or an absence? What separates real fear from imaginary fear? Is there a difference between natural and artificial darkness? And so on. In response to these interviews and our personal research, The Deep Dark was formed. 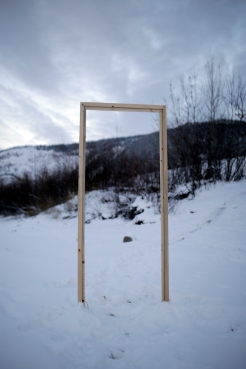 We brought The Deep Dark to Dawson City as the beginning of a 1-month Residency through Klondike Institute of Art & Culture, where we were continuing our research on the subject of darkness. Dawson is no stranger to darkness, cold, and the elemental power of prolonged night. Because of its high northern latitude, Dawson City is subject to widely variable light conditions. On the shortest day of the year, the sun emerges for 4 hours and rolls lazily around the horizon line, shining from such a low angle that most of the town is eclipsed by the surrounding hills.

These conditions can have a huge impact on the community (for better and for worse), affecting behavior, social patterns, daily routines, and physical and mental health. Temperatures drop, sometimes below -40 degrees Celsius, and even the heartiest “sourdoughs” feel the deep dark closing in. However, the darkness offers something many cities do not: minimal light pollution, an infinite overhanging tapestry of stars, and a good chance of seeing some breathtaking Northern Lights. Not to mention an extraordinary, resilient community. 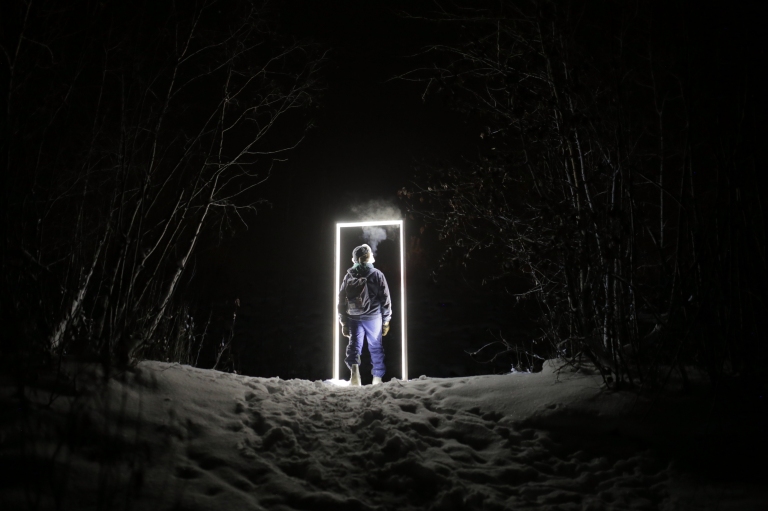 Within the context of our shared practice – where we are often thought about as “light artists” – The Deep Dark emerged from a desire to re-contextualize light by exploring its antithesis. While the project has been stewing for many years, now that we’ve begun, we’re allowing the series to emerge slowly. As with the first installation, the second will emerge in relation to a series of interviews conducted with Dawson City-based people, in combination with research and experiential exploration. Unlike the first set of interviews (where each interviewee was blindfolded, set into a state of artificial darkness), we intend to approach this process through loose conversations, with a focus on the physical, psychological, and social implications of darkness to this particular place + space. 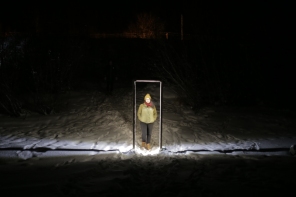 The basic principle of The Deep Dark: twelve doorframes stand as gates through which viewers pass. The gates are mono-directional and lined in bright white LED strip lights, framed in so that, as the viewer passes through each gate, they transition quickly from extreme brightness into perfect dark. Human eyes will overcompensate for each state, and the viewer is temporarily night-blinded. A friend in Banff described the experience as feeling similar to “being photocopied.” 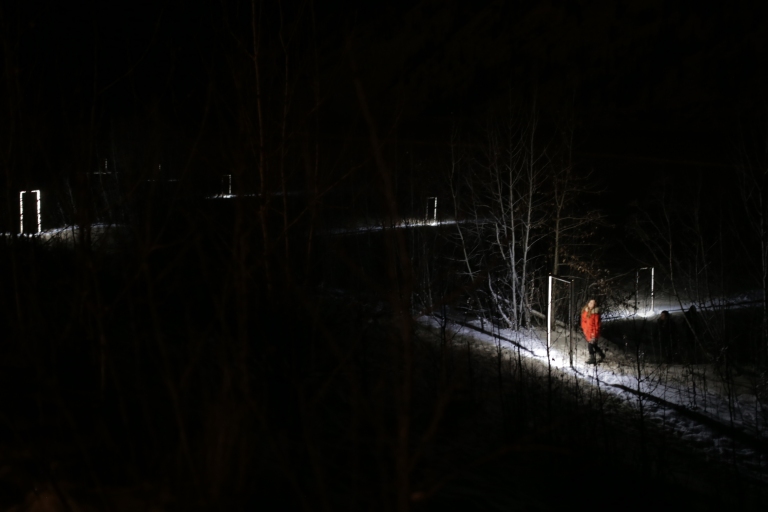 The most beautiful and surprising elements of installing The Deep Dark in Dawson came from the landscape itself. Plumes of breath billowed like illuminated clouds around the heads of viewers as they passed through each gate. Footsteps in the snow compressed creakily, the sound traveling across immense distances through the cold air. And the swoosh of the river, saturated with blossoms of ice, was unlike anything we’ve ever heard before – at once both eerie and comforting, a perfect pairing with the deep dark surrounding.

One thought on “The Deep Dark in Dawson City”