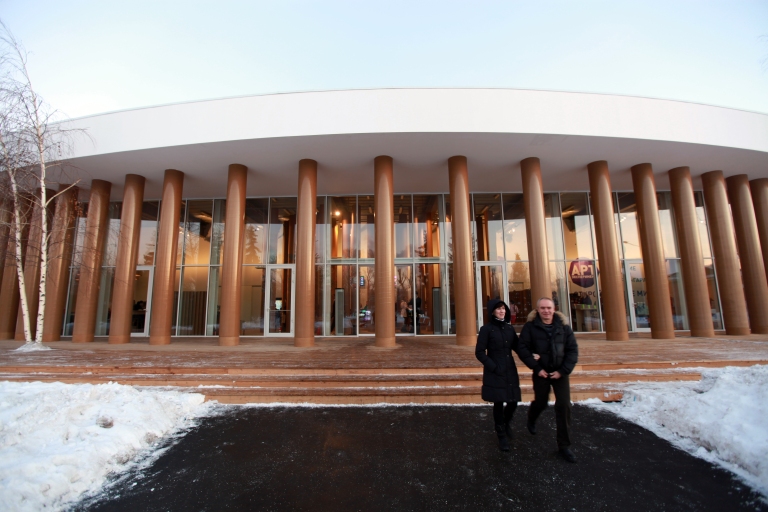 Art Experiment 2013 has opened at Garage Center for Contemporary Culture here in Moscow, and by all appearances it is a tremendous success! The next week is SOLD OUT, and kids are already wreaking happy havoc on CLOUD (holy cow, I underestimated the destructive powers of children. A couple hundred Russian toddlers are a far greater damaging force than 10,000 drunk Calgarians!) But before we get into the meat of CLOUD in Moscow, I’d like to introduce you briefly to the other artists featured in Art Experiment 2013.

The first artist to arrive in Moscow (after Wayne and I) was Danielle Tay. Danielle is originally from Singapore, but based in London, UK. A student at Slade School of Fine Arts, Danielle’s piece in Art Experiment was called Pods and played with microscopic/macroscopic worlds, each based around a theme (ice, sand, underwater, etc). Audiences were invited to interact with the pods by entering the spaces and touching them. Depending on the pod, they could either play in the sand, run their hands over crazy green noodles, listen to a sound piece, or inspect some cool collages. Art Experiment audiences were then invited to build their own pods in the workshop room next door. Pretty awesome! 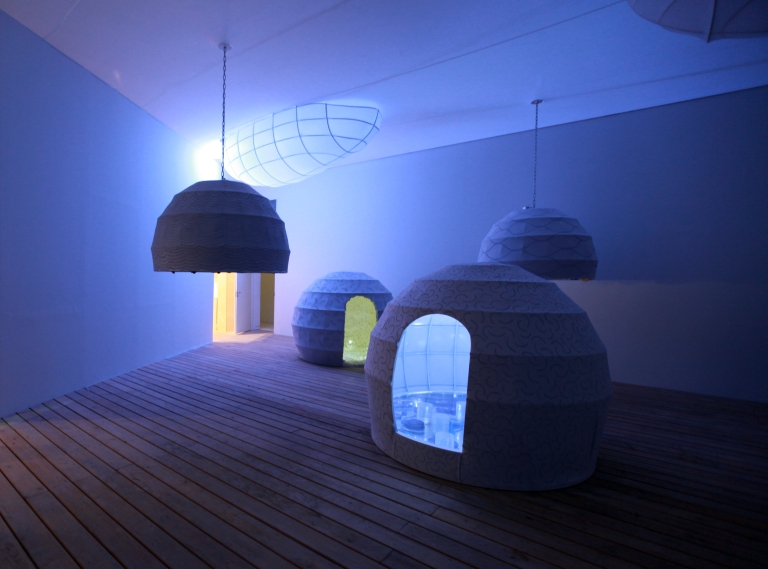 Jason Hackenwerth was the second artist to arrive at Art Experiment in Moscow. Jason built some large-scale inflatable tunnels for the show, and created one of his staple balloon sculptures. Jason’s previous work has appeared in some amazing spaces – as seen in the image below, he’s shown inside the theatre at the Guggenheim!

Jason’s also created a series of fantastic performative photographs. In the one below, he hiked out onto a lava flow to create an image. Apparently the lava rock was sharp as glass, and just as they prepared to take this image, it began to snow. Jason was screaming at the universe when the image was created. 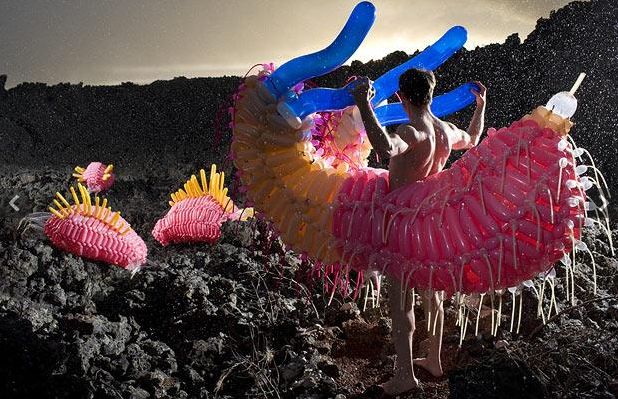 For Art Experiment, Jason was working with billowing plastic to create Aquarius, a piece which he tried to infuse with spiritual properties. It’s hard to tell from photographs, but these giant domes were inflated using just two fans. They fluttered ever so slightly in the wind, like being inside a gigantic floating jelly fish.

Karina Smigla-Bobinski was the third artist to arrive at Garage. Originally from Poland, Karina is now based in Munich, where she teaches and creates art. Karina has worked in a variety of mediums (I recommend viewing her website for a more comprehensive view of her work). The image below is a photo of a temporary installation created by Karina for a park in Munich. Entitled Islands, the piece used very simple technologies to create the illusion of Rubble Women floating beneath the surface of the water in this historically complex public space. Apparently, movement in the surface of the water made the women look as though they were breathing.

For Art Experiment at Garage, Karina showed ADA, a large helium-filled ball covered in charcoal nubs. The piece floats gently in the space until interacted with by viewers, who can toss the ball against the walls, creating scratchy drawings on the surfaces of the gallery space. During the course of the exhibition, the walls and ball evolve into a dense collection of scribbles. At that point, anyone interacting with ADA gets completely covered in charcoal! Karina has shown ADA all over the world already, and it was interesting to hear about some of the interactions that the piece inspires in viewers. 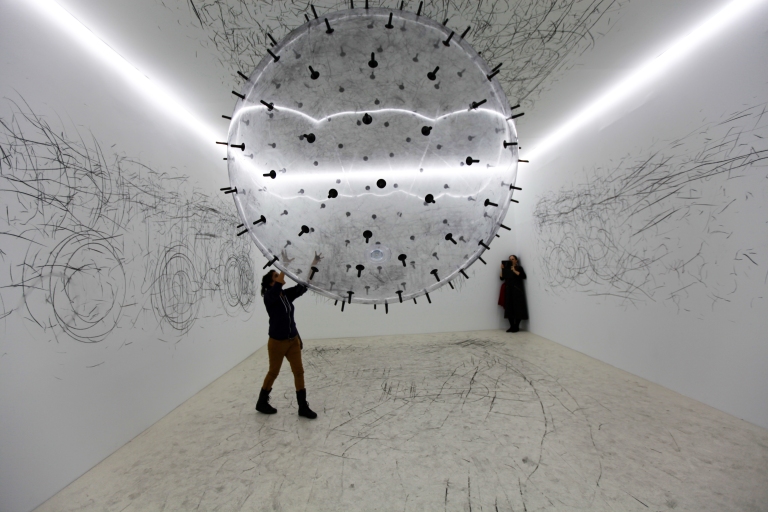 The fourth and fifth artists to arrive were Hsiao-Chi Tsai & Kimiya Yoshikawa. Working frequently as a collaborative team, Hsiao-Chi and Kimiya were curated into Art Experiment fairly late in the process of organizing the exhibition. Because of this timing, they were given very specific stipulations by Garage. For example, their previous work (as seen below) is incredibly colourful. For Art Experiment, they were asked to create an all-white work coloured via projections. Likely, this was intended to compliment the workshop already scheduled for the space, where viewers are invited to create marbled tote bags. 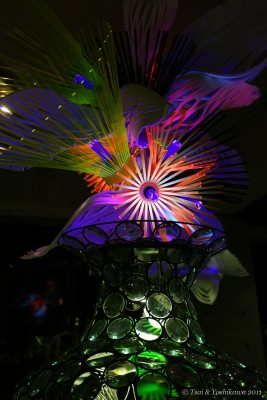 Because of the perimeters for their work at Garage, Hsiao-Chi and Kimiya were genuinely experimenting with white materials for the first time at Art Experiment. The resulting piece is a kaleidoscopic wall sculpture. I’m looking forward to spending more time observing this piece in between workshops when the space can be completely dark!

On a side note, it was really interesting talking to another collaborative team about their process as a duo. 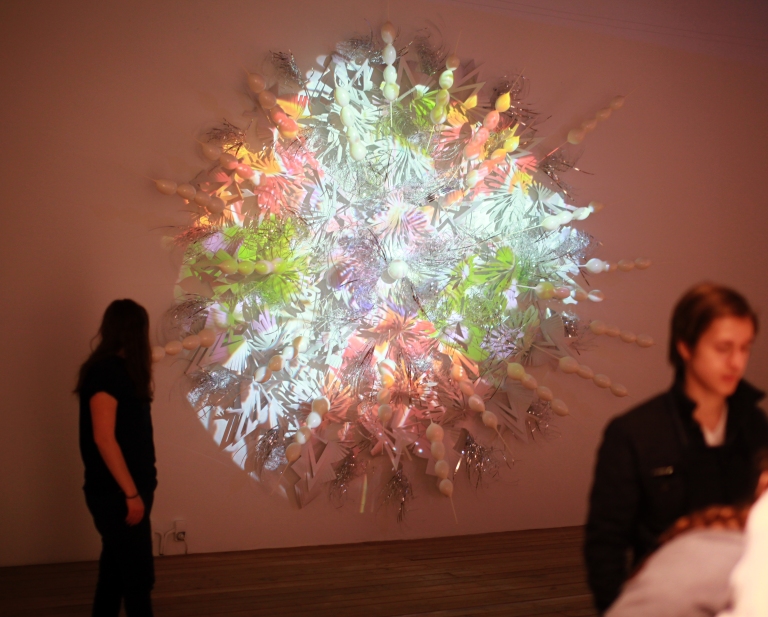 The last two artists to show up at Garage were Sam Bompas and Harry Parr. Known as “Jelly Mongers,” Sam and Harry are, simply put, real characters. Most of their work heavily involves food, multi-sensory stimuli, consumption (literally), and a healthy dose of persona-infused hilarity. They’ve created everything from a gherkin chandelier to a swimming pool full of jelly! These dudes are real party pleasers. The below images are from their book, (which is available on Amazon) called “Feasting with Bompas & Parr.”

Sam and Harry’s piece for Art Experiment was inspired by Antony Gormley’s Art World sensation Blind Light, which is essentially a large, plexiglas-walled room filled with intense mist. Viewers of Blind Mist were invited to walk through the mist without the ability to see more than a foot or so in front of them.

Sam told me that he and Harry went to see the piece in London, and it was cool and all, but there was something missing. The boys decided that the missing ingredient was flavour, and so, for Art Experiment at Garage, they created a simulation of the very same piece, except instead of boring old mist, they filled the space with flavoured mist. Now, depending on the day, you can walk in and taste strawberries, lemons, mint, of a variety of other mystery flavours. How crass!

For Wayne and I, it’s been a fascinating adventure to be involved with such an interesting array of artists. New Years was something else! But those stories, I think, should only be relayed in person…

3 thoughts on “Meet the Artists Behind Art Experiment 2013”