It’s been just over two months since we returned from Seoul, South Korea, and while we are (literally) a world away, SOLAR FLARE and BELLWETHER glitter on at Whanki Museum until the end of December 2014. 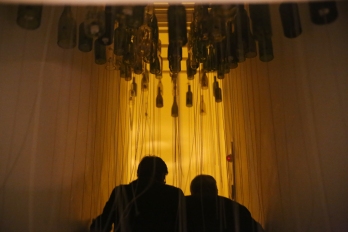 Our time in Seoul treated us well, not simply because Whanki Museum is set into the mountainside in a peaceful corner of the city, but because, in our two-weeks onsite, we were able to meet all of the other artists (Robin Minard, Kimchi and Chips, and Jungwan Bae) and  and a cross-section of the performers (Oan Kim, Kyungso Park, and Ccotbyel & Yong Uk Cho), and spend a little bit of time getting to know our international neighbours, (ie. contextualizing ourselves).

(Left) Robin Minard in his blue room during set-up, (right) Kimchi and Chips after de-installation. 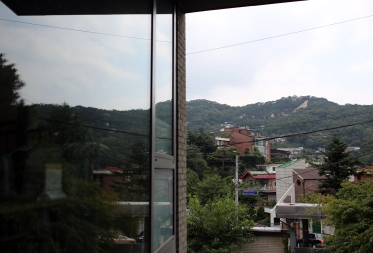 (Left) Walking to Whanki Museum. (Right) The view from Whanki Museum Having arrived in Seoul directly after a residency in the Saskatchewan woods, we were expecting the overwhelming culture shock of a bustling asian city. To be sure, Seoul is governed by the chaotic social laws of 10-million+ people and we saw more police in the city core than anywhere else in the world, but we were surprised by our early experiences of the place. Amidst crammed markets, busy street corners, and neon passageways, there are also corners of respite, channels of calm, and moments of beauty.

The semi-mountainous landscape of certain quadrants of Seoul seems to foster these pockets. It doesn’t hurt that hiking is a national pass-time for South Koreans, and the mountain parks remain mostly undeveloped, even inside the city proper.

The unexpected calm in parts of Seoul was not the only surprise. Perhaps it’s in the nature of historic cities to be duplicitous – modern, glassy architecture, facing ancient, millennial palaces, engaging in vacant staring contests while tides of insects buzz and recede beneath. 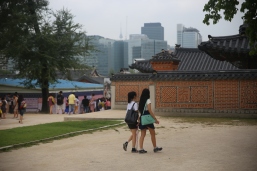 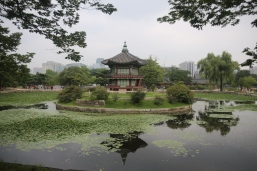 And while our particular experience was one of many potentials, we were fascinated by the feeling of the Seoul, ripe with textures and complexity. As usual, we are left wanting more and deeper understandings, a better chance to contextualize our work within a particular place and space, and a few more days to explore… but that’s life.