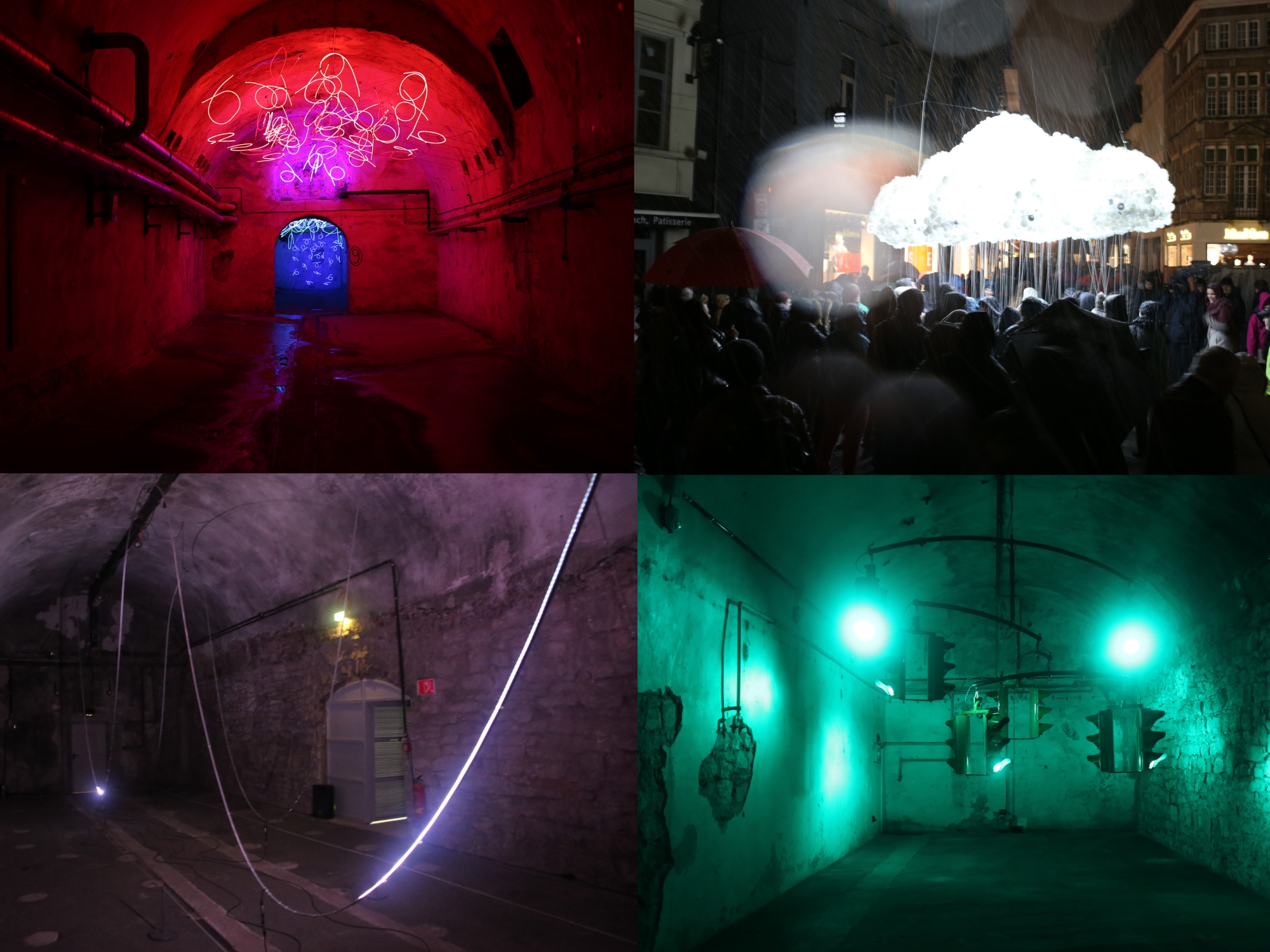 “Light is a temporal phenomenon, arising from burning stars; a surprise in the darkness of space. Light is the greatest magic of all, as it is the source of all enchantment. Without light, no life. Without life, no creation, no art, no architecture, no vision, no expression.”

~ Richard Rogers, as quoted in Lightopia: Volume I

Reflections are coming fast, hurtling backwards at break-neck speeds away from Unna, Germany on ICE 941 – the afternoon train to Berlin. We are taking advantage of our time on the continent after installing CLOUD for it’s 12th overall public showing at Licht Festival Gent in Belgium, by spending a few extra days visiting neighbouring cities (“neighbouring” by Canadian standards, where land it broad and plentiful, and cities hide between vast expanses of wilderness, farmland, and mountains). Conveniently for us, along our path of adventure, situated almost exactly halfway between Ghent and Berlin, is the small provincial town of Unna – home to the Center for International Light Art. This, it seems, was a pilgrimage designed exactly for us.

Set into an old underground Brewery, the Center for International Light Art is curiously situated beneath a remarkably utilitarian community building, unassuming aside from a tall smokestack annotated in neon. But when avid viewers (such as ourselves) descend down a blue stairwell into the bowels beneath the earth, an entirely different space awaits. 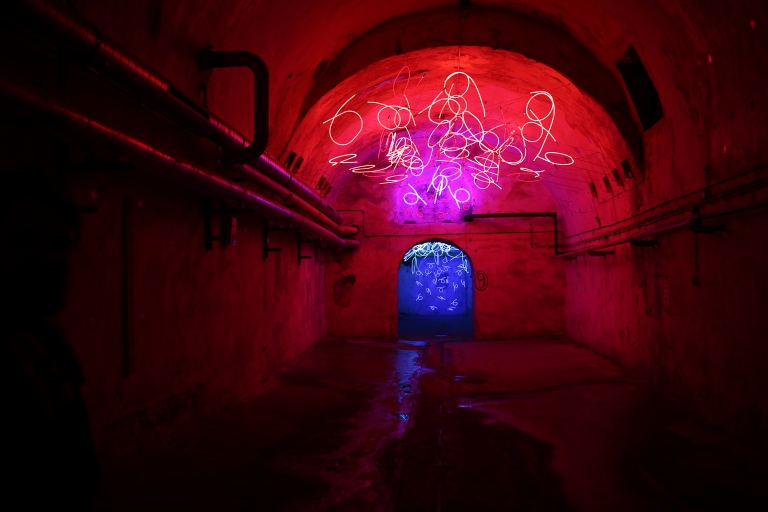 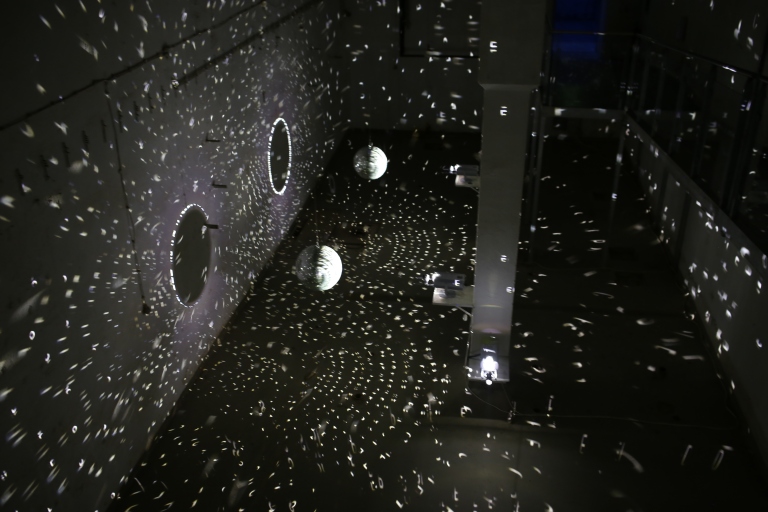 Gently, we’ve been creeping towards a series of Light Art-related epiphanies, spurred by our hyper-colour and high voltage experience of over half-a-dozen Light Festivals around Europe, coupled with viewing a handful of brilliant light-oriented exhibitions (Light Show at the Hayward Gallery in London, Lightopia at Design Museum Gent, and now the Center for International Light Art in Unna). In loose formation, these epiphanies center around the presence and purpose of light within art, critical discourse, and museum culture, while dissecting public light-based events double-edged potential to promote spectacle, entertainment, or frivolous “technurbation.” For us, this conversation is timely, but also obviously multifaceted – we have participated in many Light Festivals, and will continue to do so. We believe in light art’s radical potential to permeate public space and freely attract people, altering and changing their perspectives, sometimes permanently. While we deeply respect the magical exploits of Light Festivals (and our friends who run them), we wonder about the unexplored critical potential of this context.

Above: A work at the Centre for International Light Art by Ivan Navarro

Could (or should) Light Festivals more directly question our social and political status quo? How will they evolve and adapt in response to the increasing presence of Light Art as a more and more prevalent presence in the mainstream? What is the relationship between Light Art and advertising/entertainment/capitalist aesthetics? Do Light Festival’s have a responsibility to subvert their audience, challenge their artists, and question the society from which they hale? Or is the role of a Festival, by virtue of its mandate, to act as a forum for the relevant conversations of the day?

Light Festivals offer a populist perspective on the cutting-edge public potential of art in general, with an emphasis on unpretentious, uplifting, and inspiring new works. Just like the audiences, we are magnetically drawn towards these festivals, ready to gobble up the works with our eyes. But it is our job, particularly as contemporary Light Artists, to wonder what audiences walk away with. How can Light Art subvert the current undertones of this day and age? What is the role of subtlety vs. spectacle? What does it mean to wield the powers of artificial light? And how can we in particular learn from decades of light experiments conducted by “the masters,” exhibited within temples like the Center for International Light Art?

Above: “The Weight of Light” by Martin Hesselmeier & Andreas Muxel

For us, these questions remain to be answered, probably again and again in different measures. In the meantime, we consider each festival and museum exhibition, (alongside a whole plethora of “real life” observations), steps towards a more holistic, evolving education in Light Art. We move through this world with equal parts enthusiasm and skepticism, with our eyes open always for new moments of clarity.

“… art has, in my view, increasingly developed into a language with which things can be said that can not be said with the same precision in other languages. Art is able to go into every context, every field, every space, every social interaction – everything.”

Special thanks to John Jaspers, the Curator of the Center for International Light Art, for taking the time to personally tour us through the Feb 2015 exhibition, not once, but twice. Much gratitude!