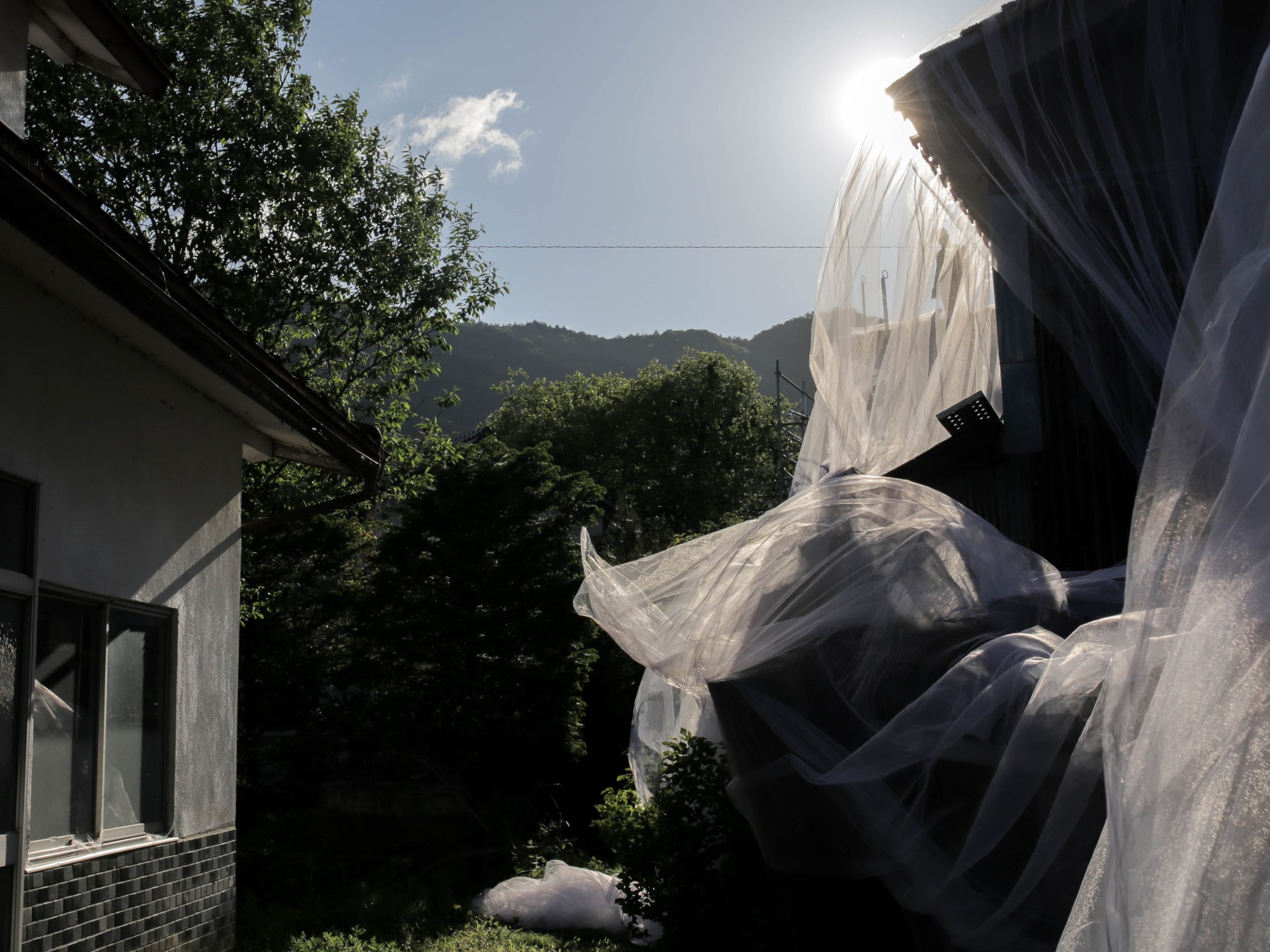 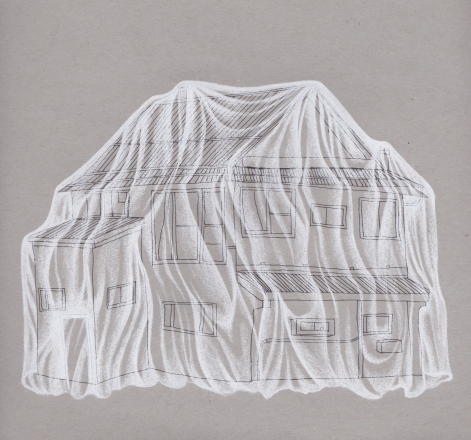 We’ve been interested in forgotten buildings and liminal spaces for a long time, not just in relation to Japan, but cities like Detroit, Berlin, Copenhagen, and in our own city, Calgary. Locally, we’re involved as artists and curators with a series of self-organized, pre-demolition projects, including: The House Project, WRECK CITY, PHANTOM WING, and DEMO TAPE.

Since 2011, we’ve worked in derelict buildings ranging from an entire city block of homes scheduled for demolition to a leaky decommissioned car wash. Our interest in forgotten city space is complicated: in part, we love the interruption of history and inherent complexity of these non-places. We are drawn by their shifting context, their reflection of changing social conditions. As artists, these sites are ripe for creating institutional critique and building dialogues about art’s place in a holistic cityscape. But more than anything, there is some strange beauty in the unfinished narrative, in peering voyeuristically into recent history and seeing, in its ruin, a more complete version of ourselves over time.

Above: an abandoned general store (top) and company house in Omachi

But, of course, abandoned buildings are simultaneously problematic, tied to issues of gentrification, civic (re-)development, consumer culture, and displaced populations. They beg the question “where did the people go?”

Working in these spaces becomes an intervention in urban regrowth, prompting moments of critical self-reflection on the changing cityscape. We approach these projects openly, with respect and sensitivity for the people affected, while maintaining a firm belief in the power of art to recalibrate social space, to offer icons, to affect the direction of change.

Above: an abandoned hotel and restaurant in Omachi

One year ago, we were invited to participate in Japan Alps Art Festival, a new triennial of contemporary art in Omachi, a small town of 25,000 inhabitants set into the mountains of Nagano Prefecture in rural Japan. Omachi is best known for beautiful landscapes, agriculture, gourmet soba noodles, and its role in the ancient salt trade. Originally established as a connecting point for travelers pedaling sacks of dried salt between the Sea of Japan and Kyoto, Omachi grew in the mid-1900s as workers flooded into the region to build several hydroelectric dams.

In the intervening years, Omachi has suffered a similar fate to many rural villages in Japan. With the movement of populations from rural to urban spaces, dwindling youth, and limited work, Omachi has begun to dry up. Abandoned buildings scatter the landscape, from restaurants and hotels, to a derelict ski hill, complete with cobwebby chairlifts. Forgotten alpine chateaus can be spotted from the highway, their roofs caving in and mossing over. Lakeside homes sink slowly into the spongy earth. The Omachi of yesteryear is crumbling, releasing ghosts into the mountain air.

Above: an abandoned hot spring in Omachi

According to the New York Times, in Japan “long-term vacancy rates have climbed significantly higher than in the United States or Europe,” leaving as many as 8-million buildings abandoned. Known as ‘Ghost Homes,’ this phenomenon of derelict domestic space is attributed to a number of factors – Japan’s population has been in decline, partially due to aging populations and decreasing birth rate. As the older generations pass away, there are fewer and fewer young people to inherit their property. High inheritance tax is cited as a barrier to those people who could take on empty houses. People move to where the jobs are. Generally, the rural dwelling has lost its allure to the convenience and excitement of the metropolis. 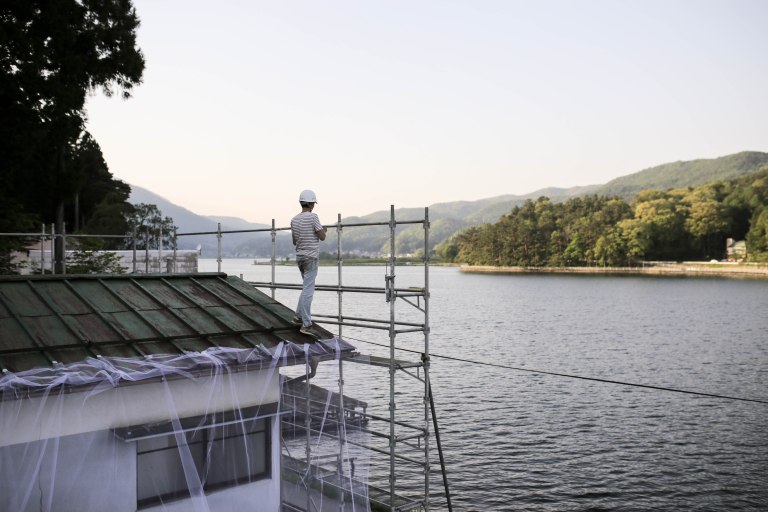 In a country where 80% of the landscape is deemed too mountainous for habitation or farming, and where usable land is plagued by tsunamis, tropical storms, landslides, and earthquakes, what does it mean for houses to perish through disuse? What does this shift imply for the people of Omachi and her sister cities? Similarly, in a cultural space where Buddhism and Shintoism have fused into a spiritual amalgam equally honouring ancestry and nature, how do the ghosts of houses – the intermediate space between people and landscape – pass beyond the veil? 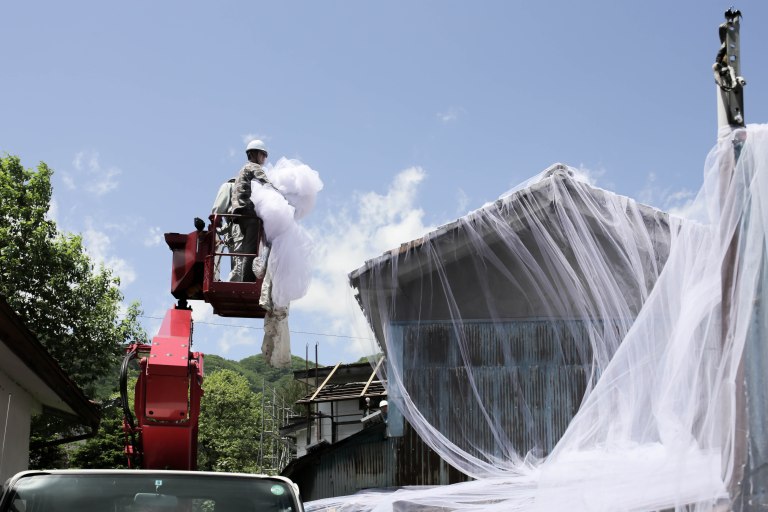 In North America, abandonment is often a momentary pause before wrecking balls and glossy real estate descends on a neighbourhood – wave after wave of new overtaking old. In Japan, abandonment felt different. We heard again and again from local people that they would be “thrilled” if someone would either renovate, or demolish, any of the abandoned properties.

In thinking about Omachi, we developed Beyond the Veil as a site-specific installation intended to create an icon for the Ghost House. Defined by the Oxford Dictionary as the “mysterious or hidden place or state, especially the unknown state of life after death,” Beyond the Veil draws semi-transparent tulle across several abandoned houses, a empty motor inn, and a dilapidated general store. The installation simplifies the buildings to form, imprint, and volume – shades of former function, spectres of domesticity. Like a kid pretending to be a ghost beneath a white bed-sheet, the houses are both protected and emphasized, dazzle camouflaged by a fog of fabric, pretending at otherworldliness. 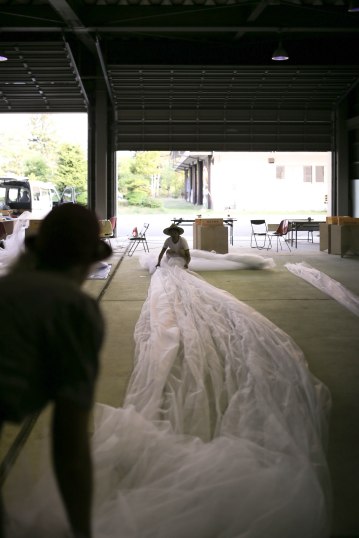 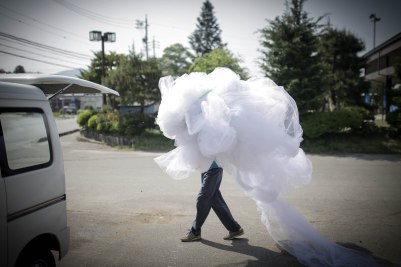 Tracing the contours of each house, the veil uses the mass and scale of each building as a formalist shape; a found sculpture. Depending on the quality of natural daylight, the veils diffuses light differently, referencing the relationship between light + spirit in Japanese culture. 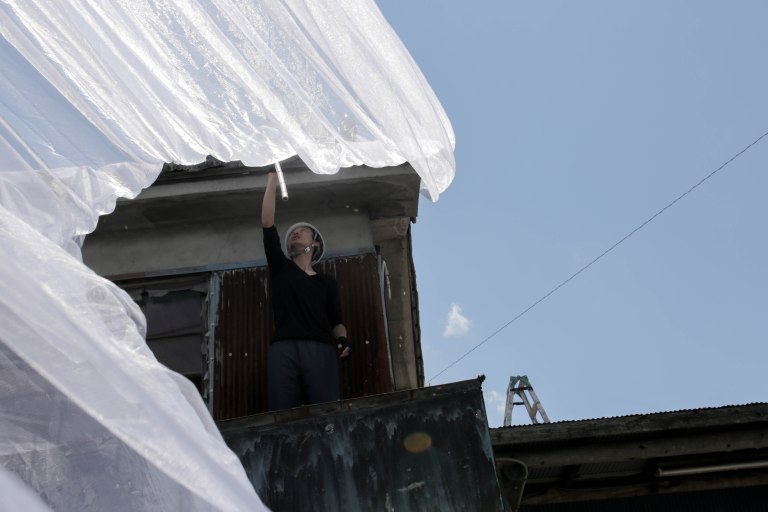 The artwork was constructed from reams of tulle, hand glued and stitched together by a legion of dedicated volunteers and helpers. The fabric was hanged in giant swathes and tailored to the buildings, falling loosely around the architecture.

Do buildings have spirits? When a space is severed from its original function, what does it become? Is it a monument to a different time? Is it evidence of an unavoidable shift? Or is it a spectre, forever harnessed to its crumbling ruin?If one believes that people can become ghosts haunting houses, then who is haunted by a Ghost Home? And how can these ghosts be honoured and released? Beyond the Veil is intended as a make-believe séance, a purifying ritual, an expose on disappearing populations, and a tribute to the beauty of the ruins.

One thought on “Ghost Homes”